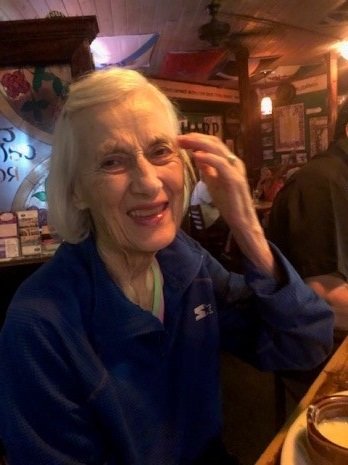 Obituary of Jane A. Eastburn

Jane Elizabeth Adams Eastburn passed away on November 10 at home in Punta Gorda Isles, where she had resided for the past fifteen years, with her devoted husband David at her side. She was born in New Bedford, Massachusetts to James and Rachel (Moores) Adams on May 6 1933, and received her nursing and counseling education at the University of Vermont and Boston University. She leaves three sons, John Goldthwaite Adams III, James Lawrence Adams (Sharon), and Jason Robinson Adams (Irma). All three have gone on to successful careers in engineering.  She is also survived by her husband of forty-four years, David Eastburn, by two grandchildren, Bryce Adams (Irina) and Kori Adams, and by her great-granddaughter, Emma Adams.

She worked as an RN in nursing and subsequently did pioneering work in prevention and health maintenance for businesses. These experiences led to her signal achievement: organizing and then directing a recovery program for veterans, especially Vietnam War veterans, at the Veterans Administration Hospital in Brooklyn, NY. She was hired to accomplish there what doctors had been unable to do. And there it was that she encountered for the first time the horror stories of Agent Orange. She counseled and moved to laughter many of the vets she worked with as she uncovered in their woundedness an extraordinary capacity for love and forgiveness. She went on to head other Rehab Clinics in the Boston area. Jane brought her charm , her practical intelligence, and her gusto for hard work to every job she took on.

Jane was happiest when praying as an intercessor, praising the Lord, or simply talking quietly with Him as she did daily. She spent time later in life in the mission field in Colombia, Bulgaria, Israel, among other places. Many of the hundreds she prayed with struggled on a daily basis to put food on the table. She maintained over the years many friendships at a distance through her generosity and warmth. She had a sixth sense for brokenness, and never hesitated to offer prayer to those she met along her way. On her daily walks she shared in conversations throughout the neighborhood, a familiar and welcome sight for many.  A remarkable woman who touched so many, Jane’s faith in the goodness of others was never shaken.

A Celebration of Jane’s Life will be held for friends and family at 4:00 PM Saturday November 16 at her home, 2790 Aqua Court, Punta Gorda.

To send flowers to the family or plant a tree in memory of Jane Eastburn, please visit Tribute Store