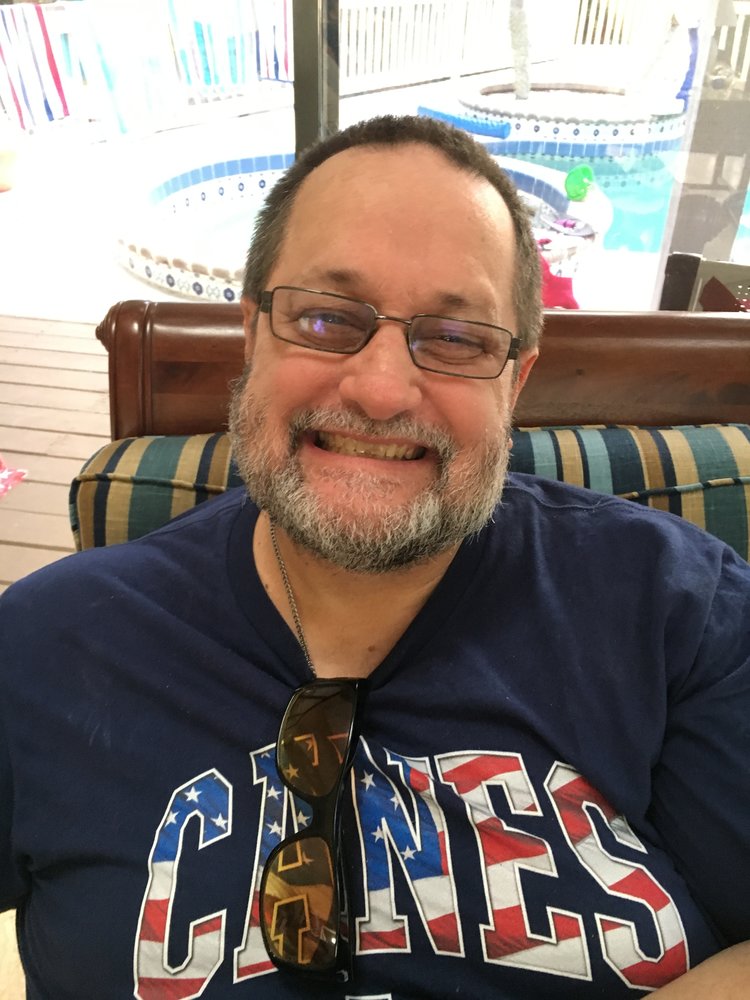 The beloved son of Pat (d. 2012) and Ray (d. 1979) Jones, he was born in South Glens Falls, New York and raised in Port Charlotte, Florida, a place he loved and called home throughout his adult life.

As a child, Scott spent many days swimming at the public pool at the Port Charlotte Beach complex or bowling at the local bowling alley or (reluctantly) taking dance classes at his mom's dance studio (Pat Jones School of Dance). Most of all, though, he liked hanging out at Pepe's Place, his family's restaurant, where he frequently found customers with whom to toss the football, swing the baseball bat, and talk sports. It is here that he developed a lifelong love of pizza, burgers, soda, and sports! As a teenager, he realized the benefits of his childhood activities: He once saved his dad from drowning during a failed family canoe outing; he bested his dad in a father/son bowling tournament the week before his dad's death; and though not a dancer, he enjoyed entertaining friends and classmates with his impersonation of Mork, from the sitcom "Mork & Mindy."

And then there's football! A lifelong football fanatic, Scott was a walking football statistics book! He memorized player profiles and kept meticulous records of the wins and losses of his favorite teams. A faithful Miami Hurricanes football fan, he held season tickets and attended as many games as possible, sharing "the thrill of victory and the agony of defeat" with other season ticket holders, including his brother Shawn and his sister-in-law Shelly. Around town, he frequented sports bars to watch games on the big screen with other sports fanatics.

In addition to football, Scott loved everything about Walt Disney World! He often bragged that he shared a birthday with Mickey Mouse! Though in his later years he had to navigate the theme park in a wheelchair, he was able to find a "silver lining": People with limited mobility--and their family members--were not required to wait in long lines to ride the rides! He made great memories with his nieces and nephews at that magical place!

Injured in an accident as a young adult, Scott spent most of his adult life working from home as a companion and caregiver to his mom, the woman he called his best friend. He doted on her, and she on him! The two ate out frequently, tipped generously, and, having been blessed with "the gift of gab," never met a stranger! They knew lots of people around town and found joy in sharing a smile, a hug, or a "few minutes" of conversation, wherever they went! The tradition of eating out frequently and sharing laughter and conversation continued for Scott, even after his mom died. He also became an avid trivia fan, participating in trivia competitions every Wednesday night at Chubby's Bar & Grill.

Most important to Scott, though, was time spent with his extended family! With his mom, vacations to visit family were a priority, and the two traveled around the country and the world to visit brothers and sisters and nieces and nephews. Closer to home, Scott had a weekly lunch date with his brother Shawn and reveled in watching his great-nieces and great-nephews jump and swim and laugh and play! He loved Jesus and was "Ho Ho Ho" happiest at Christmastime when he could shower his family with gifts!

Scott's truths didn't always align with the popular perspective. Indeed, he saw the world through rose-colored glasses. A tender-hearted soul, he trusted and loved easily, sometimes too easily. Injustices and misunderstandings could make him angry or bring him to tears, and sometimes his feelings got hurt, but he knew Jesus Christ, and he forgave people their humanity. He lived in the moment, laughed heartily, and found contentment in familiar routines and the comforts of home. He gave to others what he wanted most in life: Love and acceptance. The world will be a lesser place without him.

Scott will be missed every day by his brothers, Dennis (Tina) O'Leary, Shawn (Shelly) O'Leary, and Patrick O'Leary; his sisters Cindy (Al) Ragazzo, Marsha (Bud) Avery, and Raegen (Mark) Takahata; fifteen nieces and nephews; 26 great-nieces and great-nephews; Godmother Florence LaPoint; and best friend Ron Pitris. Having spent a lifetime in Port Charlotte, Scott will also be missed by a great number of friends and acquaintances throughout Charlotte County.

Friends are welcome to send flowers to the funeral home.  Memorial donations may also be made in Scott’s name to the charity of your choice.

Please join in a celebration of Scott's life on Friday, November 15th at 11AM at Charlotte Memorial Funeral Home, 9400 Indian Spring Cemetery Road, Punta Gorda, FL 33950.  Burial will follow services in the cemetery on site.