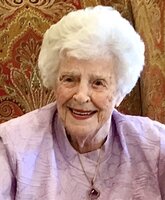 Katherine (Mahoney) Mikoloski, 102, died peacefully on September 7 at the Life Care Center of Punta Gorda, surrounded by her loving family, dear friends, and her favorite caregivers. She was born on February 19, 1920, in Worcester, MA, to the late Cornelius and Mary (Deasy) Mahoney and was affectionately known as “Kayo,” a nickname given to her by her sister, Marie, as a playful nod to her likeness of the early comic strip character by the same name. A graduate of St. Peter’s High School, she married the late Colonel Edward Mikoloski, a Captain in the US Air Force, in 1942 and together they welcomed 6 children. Throughout his military career, the family lived in various cities, including London, Paris, Long Island, NY, and Washington, DC, and enjoyed summers on Webster Lake in Webster, MA. While raising her children, Kayo worked as a realtor in Virginia and co-owned The Stationery Store in Webster, Ma. Kayo spent more than 40 years in Boylston, MA, where she worked as a collection specialist at the Peoples Bank. A woman of deep and unwavering faith, she was an active member of Saint Mary’s of the Hills Catholic Church and a well-loved CCD teacher for many years. She was also a life long fan and supporter of the Boston Red Socks and the New England Patriots. At the age of 97, Kayo was honored as the oldest female resident of Boylston and awarded the Boston Post Cane. “Isn’t it amazing that it took me 97 years to become a celebrity? Longevity runs in my family. My grandmother lived to be 104,” she said at the time. She relocated to Punta Gorda, FL, in 2018. Even as a centenarian, Kayo was an animated storyteller with a great memory for details, blessed with the gift of gab and a quick wit. She attributed her resilience, health, and longevity to her faith, sense of humor and strong Irish genes. She was a lover of dogs, novels of all genres, gin and tonics and desserts (especially chocolate). Her grandkids still remember fondly the ever-present, ever-full candy dish on her coffee table. She took great pride in her role as the family matriarch, and she will be missed most especially by those who knew her as “Mother” and “Nana.” Kayo is survived by three of her six children: Kathleen Cataldo (Pat), Stanley Mikoloski (Jo Ann Stanton), and Vincent Mikoloski (Jill). She has been joyfully reunited in Heaven with three children who preceded her in death: Neddie Mikoloski, Eddie Mikoloski, and Margaret “Peggy” McChesney. She is also survived by 8 grandchildren and 15 great-grandchildren, along with many nieces, nephews, and cousins. She leaves behind an extended family of neighbors and friends that includes Margie McHale (her favorite cook), Elaine Bresee (her ray of sunshine) and Julia Sammut (her angelic caregiver). Her family is grateful to Hospice and the many special staff members who looked after her at the Life Care Center. They want to especially thank Peggy, Wendy, Jesse, Ashton, and Frank for their compassionate care of Kayo and her family in her final days. There will be a celebration of Kayo’s life at the Sacred Heart Church in Punta Gorda AT A FUTURE DATE, officiated by her beloved pastor, Father Jerry Kaywell. ***THE SERVICE FOR THIS TUESDAY HAS BEEN CANCELED DUE TO IMPENDING WEATHER.*** She will be buried at St John’s Cemetery with her 2 sons in Worcester, MA. In lieu of flowers, donations can be made in her memory to St. Vincent de Paul Society of Punta Gorda (https://www.svdppg.org/) or to the Bosler Humane Society (https://www.boslerhs.org)