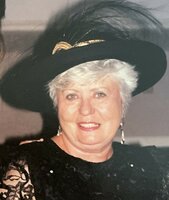 Beloved Janet Faria, 84, of Punta Gorda, FL passed away Friday July 8th, 2022. She was born November 30th 1937 in East Providence Rhode Island to the late Joseph L McGrath and Jeannette A (Carbonneau) McGrath. She graduated from East Providence High School and married her high school sweetheart, the late Frank Faria. Janet and Frank had one child whom they both adored, the late Richard Joseph Faria. Janet was a wonderful wife, mother and grandmother. Survivors include her two grandchildren, Madison and Austin Faria, great grandchild, Maya Keyt, daughter-in-law, Shelley Faria, sister, Susan and her husband Ronald Campanelli as well as her niece, Lisa Johnson. Janet worked as a successful real estate agent for many years and loved her job until it was time to enjoy her retirement. Janet and her late husband, Frank, especially enjoyed cruising and loved spending time at their summer home in Cape Cod. Janet most loved her role as “Grandma” as Madison and Austin Faria were the pride and joy of her life. A service of remembrance will be Saturday July 23rd, 2:00 pm at Charlotte Memorial Funeral Home 9400 Indian Springs Cemetery Rd Punta Gorda 33950, followed by a reception for family and friends. In lieu of flowers memorials may be made to Tidewell Hospice at 1158 Veronica St. Port Charlotte FL 33952 or you can visit them on line at tidewellfoundation.org/donate/