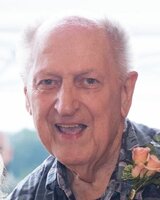 Stephen Lawrence Pekar (85) of Johnstown, Pa. and Englewood, Fl. went to be with the Lord June 15, 2022. Born August 7, 1936 in Braddock, Pa. He was baptized at St. Michael’s Catholic Church in Braddock, then later became a longtime member of Westmont Baptist Church in Johnstown, Pa. Steve graduated from Scott High School then began working at the U.S Steel mill in Braddock. In 1959, he joined the Battery B (Nike AJAX) 7th TNG Air Defense USATC in Fort Bliss, Tx. After his military service, he began working at Penelc in Johnstown, Pa. It was there that he met his wife, Judith Ann (Brendlinger) Pekar, married April 4, 1975 and traveled the world for 38 years until her passing in 2013. In later years, he was an active member of the Grand Preserve at Lemon Bay in Englewood, Fl. As a result of his generous spirit and pleasant personality, he was loved by many Florida friends with whom he enjoyed boating and socializing during the winter months. He loved to play the guitar and ride his bike to the pier to fish. He was an avid Pittsburgh sports fan and enjoyed many games with his family. Steve “Larry” is also preceded in death by parents John and Catherine (Josack) Pekar, sister Ellen (Dave) Sobek of Atlanta, Ga., brother Regis (Mary Anne) Pekar of Pittsburgh, Pa., in-laws Phillip and Susan Brendlinger of Tuscon, Az., brother-in-law James (Sharon) Brendlinger of Tuscon, Az. He is survived by brother John (Betty Anne) Pekar, Pittsburgh, Pa., ten nieces and nephews and ten grand-nieces and grand-nephews. Steve “Larry” was a wonderful son, brother, uncle, cousin, and friend to many. He will be cherished and missed dearly. The family will receive friends at Westmont Baptist Church, 115 Jeffery Drive, Johnstown, Pa. 15905 for a visitation Saturday, July 23rd, 2022 from 1:00 pm until 1:30 pm with a memorial service to follow at 2:00 pm . Donations can be made in his name to Westmont Baptist Church, 115 Jeffery Drive, Johnstown, Pa. 15905.