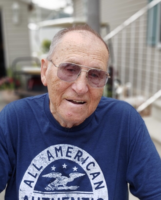 Clifford Robert McBride, 88, of Port Charlotte passed away on November 25, 2021. He was born on November 1, 1933 in Lincoln, Nebraska. He was much loved for his keen sense of humor and he was known as a prankster and he brought much joy and love to those who knew him, Cliff was a Marine and served in the Pacific Corridor. He worked for Burlington Northern Railroad for 40 years. He strong in faith and a member of Peace River Baptist Church. He was a lifelong, die hard, fanatical Cornhusker fan! Cliff also was an avid card player and loved to play bocce ball, even when his sight was failing him. He was active with the Port Charlotte Village community, helping where he was needed. He is survived by his wife, Darlene McBride, of the home, His children, Ron McBride, Sharon Zavodny and her husband Alan, Gary McBride, and Glen McBride and his wife Laura, all living in Lincoln NE, His step-children, Randy Patterson (deceased), Michael Patterson and his wife Cheri, of AZ, Cindee Murphy and her husband Dennis of FL, Lester Patterson and his wife Judy of FL, and Daniel Patterson and his wife Regina SC, along with many grandchildren and great grandchildren. He was preceded in death by his beloved grandparents, parents and first wife Judy. He will be interred in Lincoln, NE. A celebration of Life will be held at a later date.