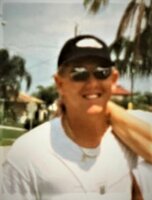 Troy G. Herr, 46, of Port Charlotte, FL passed away August 23, 2021 at his home. He was born to the late Ronald G. and Patricia G. Smith-Herr on January 29, 1975, in Indianapolis Indiana. He is survived by his sister Tara Talon and husband Joe, bother Ron Herr Jr. and his wife Jane, sister Heidi Ann Odom, one niece, four nephews as well as other extended family and friends. Growing up he was busy with his hands in a lot of different things, but many times he was in the driveway of the PC home he grew up in, skateboarding and building crazy ramps when he was younger and then car audio speaker installs and all that went with those once he was older. He had a huge love for the many vehicles he owed through the years and always treated them well to say the very least. Troy also played paintball throughout the years with close friends from the local area when he was a teen. He continued to get so involved over the years with the game that he was able to play with professional teams and even went to Australia at one point to play once he was an adult. And let us never forget Troy’s love for Fireworks and pretty much all that went BOOM. Maybe just a little trouble along the way to go with all the fun this entailed over the years. He was lucky to grow up with a tight group by his side for a lot of years; most right there sharing these many shenanigans along the way. Troy will be remembered as a fun-loving man, known for his big personality and most definitely his unique sense of humor. If you knew him at all, you knew of his love for cats, he had a few over the years and each one was as important to him as most would consider their human families. For that those kitties were lucky. Remembering you always, in the good times only. The family will have private services at a later date.