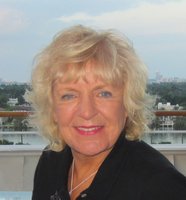 On Tuesday, April 13, 2021, Diane E. (Howard) Arnemann, 73, of Broad Channel, NY and loving wife of Charles W. Arnemann, passed away in Punta Gorda, Florida. Diane was born, raised and lived in the small waterfront community of Broad Channel, NY, where she was a parishioner of St. Virgilius Roman Catholic Church. She attended St. Virgilius Catholic School and John Adams High School. Diane developed a strong love of music and horses at an early age. Her father was an avid music lover. He sang and was a Big Band Era trumpet player and an early disc jockey. Her mother was a violinist. Diane’s life was always surrounded by music. She began to sing at a very early age and was known to pick up the microphone to sing her favorite songs to guests that attended parties at her parent’s home, known as Club 37. Diane’s parents also supported her passion for horses. When Diane was 18 years of age, she saved enough money to purchase her first horse “Stormy”. In 1967, Diane met her soon-to-be husband Charles upon his return home from Fort Hood, TX, where he was stationed in the U.S. Army. Diane and Charles were formally introduced by her long-time best friend and future sister in-law, Carol Marcley, who happened to be dating Charles’ brother Paul at the time. Charles, also a musician, taught Diane to play the guitar and supported her musical ambitions throughout the 54 years they shared together. Charles also supported Diane’s love of horses. In 1970, she purchased her second horse, “Patches” and convinced the local Day Camp to allow her to board her horse on their property in exchange for providing pony rides to children. Later in life, she continued that passion and purchased her last horse “Glory”, that she cherished dearly. In addition to her love for all animals, Diane also shared a passion for grooming and showing her adored purebred and pedigree dogs. Diane had a strong passion for guitar playing and she was an avid guitar collector. In the 1980’s, she partnered with her close friend and singer/musician, Doris Dady and performed in a country/rock duo known as “Diane and Doris”. Several years later, with the addition of other musicians, their “Nightbird” band was formed. In the 1990’s, Diane formed an all-female, Doo-Wop group, “Chantilly Lace” with other close, dear friends. As fate would have it, Diane eventually partnered with her husband Charles and friends in their already-established band and became the frontwoman for the well-known, local Doo-Wop/Rock group, “The Wax-R-Back”. Her passion and dedication to music is evident to all that have ever enjoyed her performances and big stage presence. Diane will forever be cherished by all who knew her. Diane was preceded in death by her parents, Charles Howard, Sr. & Margaret (Single) Howard, also of Broad Channel, NY. Diane is survived and will forever be missed by her incredibly devoted and loving husband Charles Arnemann, her adoring sister Marylou Howard, brother Charles, her three ever-loving sons David, Mark & Scott Arnemann, daughter’s-in-law Traci and Svetlana Arnemann and her four grandchildren, Randy, Jamie, Van Paul, and Alissa Ann Arnemann. A Funeral Mass for Diane Howard Arnemann will be held at Sacred Heart Catholic Church, Punta Gorda on Tuesday, April 20th 2021 at 11AM. -- Church Address: 211 W. Charlotte Ave., Punta Gorda, Florida 33950 A Memorial Reception will be held following church services at Charlotte Memorial Funeral Home & Cemetery at approx. 12 Noon - 2PM. -- Reception Address: 9400 Indian Spring Cemetery Rd., Punta Gorda, FL 33950 - https://charlottememorial.com/ All are invited and welcome to attend both Funeral Mass and Reception services. In Lieu of Flowers, the family suggests memorial donations be made to The Glioblastoma Foundation – Link: https://glioblastomafoundation.org/get-involved/donate or to the charity of your choice. Interment will be private and limited to immediate family.