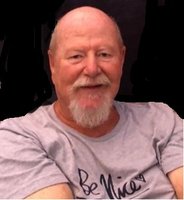 Alan M. Fetch, of Punta Gorda, FL, passed away peacefully on February 21, 2021 after a courageous battle with cancer. He was 67 years old. Al was born on May 14, 1953 in Bismarck, North Dakota, to parents Willie and Nancy Fetch. He graduated from Bismarck High School in 1971 and on November 17, 1973 married the love of his life, Joy. The first thing people noticed when they met Al was his distinct voice and magnetic personality, so it is not surprising the success he had in the radio business. After attending Brown Institute of Broadcasting he began his 25-year career in radio where he started out as an on air personality, moved into sales then onto management and eventually ownership. At the “old” age of 44 Al was lucky enough to retire from the grind of corporate life and began enjoying the Jimmy Buffett lifestyle. He had a love for the outdoors, fishing, hunting and waterskiing. He was adventurous and enjoyed his grown-up toys, which included a ’91 ZR-1 Corvette, Harley Davidson motorcycle, numerous boats and motor homes. He worked hard to get his fixed wing and helicopter pilots licenses so he could fly his own V-tail Bonanza and SUNY-95’s Yellow Thunder. Al and Joy loved to travel, spending months each year traveling around North America in their motor homes, enjoying lobster bakes in Maine, hiking and jeeping around Montrose, CO & Moab, UT and visiting National Parks. During winter months they spent time out on their own boat, Little Miss Magic, anchored in Pelican Bay at Cayo Costa, or took trans-Atlantic repositioning cruises. Al was happiest when traveling to visit family. He loved his children fiercely and his grandchildren were the light of his life. He was their biggest fan, sitting through countless soccer, football, baseball, softball and swim meets, and was always their loudest cheerleader. Grandpa has left all of them with countless memories of fishing, motorcycle rides, magic tricks, talks and life lessons to last them a lifetime. He passed on his love for the Buffalo Bills, Tampa Bay Rays and The Ohio State Buckeyes, making sure each of them knew how to say “Go Bucks” as soon as they learned how to talk. Al’s laughter was contagious and has been imprinted on all our hearts. Throughout Al’s hard-fought battle with cancer this past year his faith in God never wavered. He is a true son of God and never questioned God’s plan. While “Big Al your radio pal’s” journey on earth has come to an end, we believe he is “On the Road Again” to a bigger and better purpose. Al is survived by his beloved wife of 47 years; his children Kristy (Bryan) Carothers, Spartanburg, SC; Keif Fetch and Sarah (Adam) Zielachowski both of Columbus, OH; grandchildren Coby, Connor, Makenzy, Makenna, Brayden, Macy, Liam and Ryder. Siblings include Deb (Bob) Dolajak, Jim (Lori) Fetch, Cindy (Wade) Anderson, Kelly Fetch, Lori (Tony) Turitto and Conni (Kevin) Allmaras all from North Dakota; and many nieces and nephews. He was preceeded in death by his parents. A Celebration of Life Ceremony will take place at Holy Trinity Lutheran Church in Port Charlotte, FL on Sunday February 28 at 1:30pm. Due to Covid-19 facemasks are required for the service. In lieu of flowers the family requests donations be made in Al’s name to Tidewell Hospice for the Port Charlotte Hospice House. Send checks to: Tidewell Foundation, 5955 Rand Building, Sarasota, FL 34238. On-line donations can be made at tidewellfoundation.org/donate.